So while we were in Vancouver & Alaska, I decided it might be interesting to keep a journal of our travels. I didn’t want to update this right away because there are photos on both my husband’s phone and mine that I want to share.  Also, I was trying to keep the journal daily but when you walk around a tom all day and then walk around the ship, it can get tiresome.

Today we left our house at 5am. It was probably one of the earliest times we’ve left for a trip.  And when we got the airport we knew we had a long time to sit (3-4 hours total) without the time change. However, there was a family of almost 20 going on a big family trip to Alaska on a Holland America ship that made our trip start in an exciting way. The only frustrating thing is that we had to shift items in our suitcases because I was over by 4 lbs & Shawn had very little space to spare.  Luckily we didn’t have to pay anything extra and considering most of weight is coming from gifts I will be handing out (including 14 of mini whipped cream vodka bottles) & alcohol we will probably be drinking so we figure we will be fine. Plus my carry-ons have a ton of space. 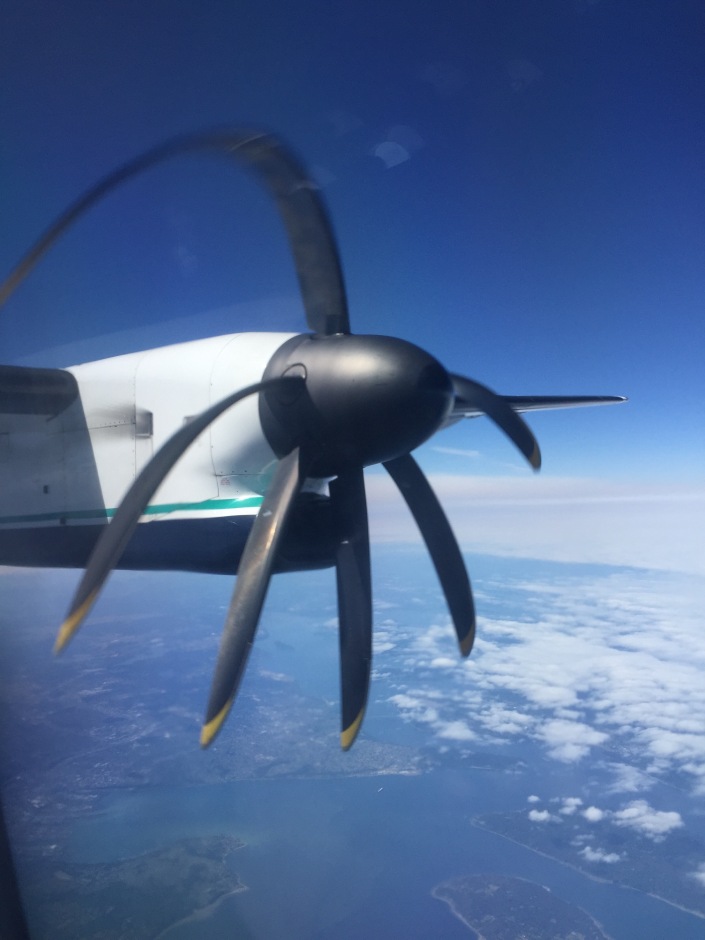 We arrived in Portland, OR around 8:45am and enjoyed a wonderful made bagel sandwich and Shawn had a breakfast burrito. As we were enjoying our food, we noticed a couple walking by, maybe in their later 40s-early 50s with no children.  It would have seemed like any other couple except for the fact that the husband was wearing a “9 3/4” platform shirt for the Hogwarts express and the woman was wearing a captain america t-shirt.  My words to Shawn? – “Look honey, us in 10 years.”

To make a long story short, they ended up being on our Portland to Vancouver flight and we found out that not only are they massive disney fans like Shawn and I but also that they were on our cruise with a large “mouse-something” group (like the DIS boards I’m a part of–found it later it’s called micechat) of about 40 people who are on our floor! It was perfect.  We split up as soon as we got on the plan due to our seats and separation of the large 20-person family in front of us… but that’s okay. I’m sure we’ll see each other, if nothing else in passing to our rooms.

So…normally when you travel, you fly all day and get somewhere and maybe eat dinner and go to bed. But not here. We arrived to Vancouver and got our rental car by twelve noon. Driving into the city was amazing because we were closer to all the beautiful bridges, lakes, water ways  & pine trees than we had been in the air. Once checked in to our corner windowed room, we set out on our travels. First we went to a Tim Horton’s–which is really a coffee shop. But they also sell amazing donuts in the most amazing flavors. So I purchased a vanilla dip (see photo) with sprinkles and shawn had a chocolate dip similar to it. We also got apple fritter donut holes. Something donut shops in the US should get into.  Anyways, that donut shop was amazing.  Thinking we had met our afternoon goal and could “easily” walk about to the hotel, we passed another placed called “The European Fry House.” No, not a stir fry, but FRIES! you can get them with gravy, several difference dipping sauces and the lady behind the counter was nice for explaining to us the currency, what its like and how to deal with it since we had just secured our Canadian cash. (see below). MUST GO HERE if you visit Vancouver.

We finally made it back to our room by walking around the block and browsing a thrift store. Then we later went out with the intention of going to two places: A cigar store where we met a wonderful lady who talked to us for almost an hour about her unique heritage and what it is like living in Canada. FYI there is no “Canadian” bacon. We have determined they either don’t have it or its similar to our bologna.  The other place being where they filmed Bates Motel over in a suburb of Vancouver.

What ended up happening is we drove down to the US/Canadian border and crossed over to Ferndale, WA to get a diary queen blizzard. We then came back through another border checkpoint on our way to the Bates Motel set. It was hysterical because the first time the border guard questioned why we were coming back to the States.  They basically ask you where your from and where you’re going.  I guess my red hair makes me look suspcious so Shawn had to end up explaining that I had a desire to want to cross the border. The guard just laughed and said “welcome back” which made it a little easier. On our way back into Canada, the guard actually started asking real serious questions and was talking about pulling the car over to take it all apart but then ended up making a joke totally understanding we were first timers or just not used to crossing. Shawn and I almost freaked out by the second guy but thankfully said “just kidding guys – have a good time.” We almost melted we had been so stressed. still, they let us return to our luggage in Vancouver and we called it an evening.

Remember how I said we went to two places? Yeah, it ended up being three–a place called Pirate Joe’s. So, Canada doesn’t have Trader Joe’s and many people in vancouver driver across the Bellingham, WA to go to Traders…Well, I guess there is enough demand that someone decided to run across, get the items, then sell them for a slightly higher price so people don’t have to drive. Bag of chips?-$4.99 (which is about $4 USD; the normal bag at Traders cost maybe $2…) Interesting concept. The things we take for granted in America.

Also–the one thing I noticed how much the border looks like we’re passing through a toll both. Nothing like the Mexican border, which I have not crossed. It is literally a bar and a guard. Nothing like the fence/wall. There is maybe a yellow bar to distinguish the country line. It gives you a new perspective on border crossing, immigration and illegal immigration.

This entry was posted in New Life and tagged Disney Cruise, travel, Vancouver.

Fries with gravy is called poutine in Quebec and Ontario. Is it called the same thing out west? There are actually Tim Hornton’s in Northern Indiana, Michigan and Ohio. I wish we had one here!

Yes it’s called pouting in Vancouver as well and honestly, it’s the most amazing food ever. We have become hooked on it.i never saw the Tim Hornton in IN but the donuts are amazing