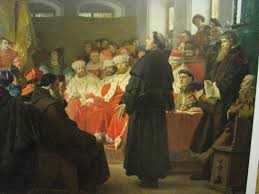 This quarter I am taking Medieval/Reformation History.  It starts at the beginning of the feudal system and the Fall of the Rome Empire in 410 to the death of Queen Elizabeth I in 1603.  Right now we’re just starting the decline of scholasticism (and of such figures as Anselm, Thomas Aquinas and such) along with the rise of mystics and the Avignon Papacy period (pre-Reformation.)

This is probably my most favorite part of history.  Arguably I would say because I am a reformer at heart. I am always looking to make something a little better–to connect deeper to God, to be more like His image instead of my self-made self. Even though I grew up Methodist–I loved hearing about Luther and his 95 Theses and how he challenged the authority of the church to point out the problems the Catholic church in hopes to bring everyone together.  When I got in grad school and had already committed to a Lutheran church as a member, I  loved learning more about the Augsburg Confession and Apology that Luther and Melanchthon wrote and the beginnings of the Lutheran Church–shocking.

Right now I’m working on writing a paper that the Catholic Church contributed to the spread of Lutheranism.  Every time I read more about the the Reformation, it surprises me the disorganization of such a hierarchal group. And some of their responses–it takes them years to clean up “wrong words”, if you can say that.  Though I know I am not Catholic– and I definitely do not want to upset my catholic brethren– it is just upsetting as a Christian to see that reform, in the true sense of the word, could not be reached and separation is formed.

Anyways–if you want a fun read–get into Medieval and Reformation history–there is always something interesting going on, whether it is witch burnings, crusades, 3 Popes at one time or hundreds of theological arguments forming (fun is a relative word, ya know?)